How to Become a Casting Director 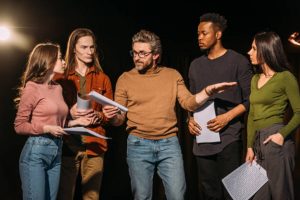 Casting Directors are professionals who work in the entertainment industry to find the perfect talent for a variety of media productions.

These productions can include commercials, television shows, films or theater productions.

Individuals who want to become a Casting Director will have a natural interest in the entertainment and have a strong interpersonal skills because of the amount of time they spend meeting with a variety of individuals.

These professionals will spend most of their time in the preproduction phase of a production gearing up for small or larger projects.

Although there are no specific educational requirements to become a Casting Director, the majority of individuals who enter this field have a minimum of a Bachelor’s degree.

In addition, Casting Directors must also focus heavily on attaining an extensive work history in this field.

For individuals who pursue a Bachelor’s degree in order to become a Casting Director, their career begins at the college or university level.

During their college degree, individuals can study cinematography, film or cinema in order to gain the education background needed to succeed in their profession.

Other areas of study individuals can focus on include degrees in English, Acting, Journalism or Communications.

Individuals will need to be acquainted with the industry and taking classes in lighting, editing, film history will help with that much needed experience.

In addition, during their college career, students will also gain hands on training in creating productions and short films that will give students the necessary experience to practice their skills.

In addition, individuals may also gain experience by beginning their career working as a Casting Assistant.

Because most entertainment professionals such as Directors, Producers and Casting Directors have memberships to professional agencies such as the Casting Society of America, individuals seeking to get their foot in the door should seek training, internships and apprenticeships through these professional societies.

Individuals seeking networking or open positions may visit the Casting Society of America for opportunities or more information.

Casting Directors focus their work on the preproduction on a variety of works.

Individuals in this field may work on a variety of productions including commercials, advertisements, theater productions, films or television shows.

Casting Directors are hired by production companies, networks or studios and their main focus is to find and scout the right individual for a role for the project they are working on.

Casting Directors do not work for the Actors or represent them in any way, but work for the company seeking the perfect Actor for the production and therefore do not receive any fees or commission from the acting professional or their agent.

Because Casting Directors work for a production company, network or studio, their main duty is to work on their behalf for the best deal.

Casting Directors will negotiate deals on behalf of their agency to pay the best wage for the right actor for the job.

Protecting their company’s interest will help the hiring company potentially save money or get the best deal.

Casting Directors also work in conjunction with other professionals including Directors, Producers and writers to find the perfect talent for a production.

The median annual wage for Producers and Directors, which includes the Casting Director profession, was approximately $71,350 in 2012.

Exact wages will depend on the industry an individual works in.

Job projections for Producers and Directors are expected to increase by 3 percent through the year 2022.

Although the demand for Casting Directors is expected to be competitive, the job prospects and pay is something that may attract individuals to this profession.

Individuals who seek a career in the entertainment industry will have to be persistent and work hard to achieve a comfortable level of success.

The top earning state in the field is California, where the average salary is $121,950.

The top earning state in the field is California, where the average salary is $10,083.

The top earning state in the field is California, where the average salary is $58.63.

What is a casting director?

Casting directors are responsible for organizing and supervising the casting of actors for movie, television and theater productions.

They are involved in the pre-production part and typically intermediate the relation between actors and producers/directors.

Casting directors have to work closely with directors and producers in order to select the best actor for each role.

A casting director’s job expands beyond the casting period.

Casts sometimes include hundred of actors and the casting director’s job is to negotiate with actors and their agents and to manage the contracts once the actor is hired.

In order to be good at their job, casting directors need an eye for talent, patience, and good communication skills.

Casting directors may be employed by a studio or casting agency or may work independently.

How much does a casting director make?

The Bureau of Labor Statistics doesn’t record specific data about casting directors but the median annual salary for directors and producers, in general, was $71,680, as of May 2018.

How much does it cost to become a casting director?

One way of learning the skills needed for this job is to work with an experienced casting director.

A bachelor’s degree in film production or a related field may also help you understand more about moviemaking.

What is the demand for casting directors?

According to the Bureau of Labor Statistics, employment for producers and directors, in general, is projected to grow 5 percent from 2018 to 2028.

This growth is explained, in part, by the increasing number of internet platforms and streaming services that produce their own TV shows.

The number of employment opportunities for casting directors in theaters is expected to grow slower because many small theaters have difficulty in finding funding for their productions.

How long does it take to become a casting director?

There are no formal educational requirements for casting directors but getting a bachelor’s degree in film or a related field may help you start a career in this field.

Earning your bachelor’s degree will usually take around 4 years.

Shorter courses are also offered at many colleges and universities and can last between 1 and 4 years.

Most casting directors learn their skills by working alongside someone who has experience in the field.

You may start your career by finding entry-level employment in the movie industry or in television.

This will give you the opportunity of networking and sharing ideas with actors, directors, producers and other industry professionals.

A movie director is in charge of the creative and technical aspects of a film.

Band directors are responsible for managing and directing bands at the amateur level.