How to Become a Bus Driver 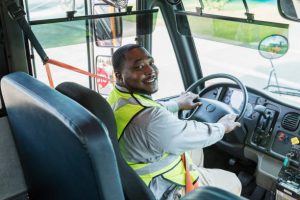 People who rely on public transportation heavily rely on trained professionals such as Bus Drivers in order to get around town.

Bus Drivers can provide their services for transit companies, local or intercity as well as for school systems.

Intercity transit companies travel from city to city or between towns.

Local transit companies are typically funded by the city or county they service and are connected through a city wide transit routes.

While school Bus Drivers help students commute from their homes to school.

Bus Drivers must be able to show that they have a clean driving record in order be hired in this profession.

This also shows potential employers that they are capable of driving commuters through a variety of weather conditions and traffic.

Potential Bus Drivers must have the ability to remain calm while driving and are required to sit for extended periods of time.

Continue reading below if you are interested in entering this field.

Listed below are the education requirements to become a Bus Driver as well as a general job description, salary and wage information and the future job outlook for these professionals.

Candidates who want to become a Bus Driver have to follow state or federal mandated standards and qualifications.

This would include applying for and acquiring a commercial driver’s license CDL.

Employers seek candidates who have a clean driving record and a high school diploma.

Some transit companies may require applicants to take a written test in order to become a Bus Driver.

This exam will test applicants on their ability to follow complicated and detailed bus schedules.

A candidate with no previous experience in this field will need to fulfill training requirements in order to become a Bus Driver.

This training will include information on the responsibilities Bus Drivers need to fulfill.

Trainees will learn safety protocol and regulations, company rules, driving regulations and techniques on how to be a safe driver.

Trainees will practice all this information on a driving course when available.

Trainees may spend up to 8 weeks practicing their bus driving abilities and eventually begin driving on public streets and highways while being supervised.

Bus Drivers must follow their designated route making sure they stay on track and on time.

They must perform this function all while following safe driving mechanics.

Bus Drivers must be able to remain calm while driving during periods of heavy traffic.

Bus Drivers working for intercity or regional transit companies must collect fares before allowing commuters on board.

They will need to have thorough knowledge of their route and may be asked by commuters for directions to different locations or parts of town.

In addition, intercity and regional transit drivers must provide a variety of information regarding trips.

This may include any mechanical issues, trip delays and other trip or route information.

Intercity drivers are responsible for following rules and regulations implemented by the U.S.

The Bureau of Labor Statistics reports that the national median wage in 2008 for Bus Drivers working for a local or intercity transit organization was approximately $16.32 per hour.

The salary range for these professionals during the same year was approximately $9.82 to $26.74 per hour.

Bus Drivers working for a school system tend to make lower wages and earn a median wage of $12.79 per hour.

Employment opportunities for these professionals are expected to grow at an average rate.

Bus Driver positions will grow by 7 percent through the year 2018.

Prospects for Bus Drivers seeking employment in an intercity or local transit organization should see a growth of about 8 percent through 2018.

Those seeking employment in a school system should see a growth of about 6 percent through 2018.

Job opportunities for Bus Drivers will be created due to a growing population, social awareness for the environment and the fluctuating price of gas.

Applicants seeking work within a local or intercity transit system should expect more competition than those who seek work within a school system.

Candidates seeking jobs in a school system will find more opportunities due to a growing suburban population and the tendency for a high turnover rate within this profession.

Candidates who are willing to work irregular or part time hours and have a clean driving record will have more opportunities as jobseekers.

The top earning state in the field is New York, where the average salary is $62,060.

The top earning state in the field is New York, where the average salary is $5,167.

The top earning state in the field is New York, where the average salary is $29.84.

What does a bus driver do?

A bus driver is someone who drives buses for a living, transporting people between different places.

Some bus drivers have a regular route while others transport passengers on sightseeing tours.

Charter drivers, or motorcoach drivers-as they are sometimes called, transport passengers on sightseeing tours and follow a route arranged by trip planners.

Some bus drivers work for a public school, transporting students to and from the school; to be allowed to drive a school bus you must take an additional test and receive a special endorsement.

As a bus driver, you may also have to perform some basic maintenance checks and keep the bus clean.

How much does a bus driver make?

Wages vary depending on the place of employment.

According to the Bureau of Labor Statistics, the median annual wage for bus drivers who work for schools was $32,420, while those who transport people between different cities earned a median wage of $42,080 a year as of May 2018.

How much does it cost to become a bus driver?

In the United States, bus drivers typically need a commercial driver’s license with specialized training for driving a passenger vehicle.

CDL training costs vary widely depending on the school you choose.

Getting your commercial driver license can cost anywhere between $1,500 and $8,000; in order to be allowed to transport passengers, you will also need a special endorsement which adds an additional cost of $10-$50.

Most employers prefer to hire drivers who also hold a high school diploma.

Many states require bus drivers to be at least 18 years of age and those who drive across state lines to be over 21.

What is the demand for bus drivers?

According to BLS, employment for bus drivers is expected to grow 5 percent from 2018 to 2028.

Job opportunities will be created by the new Bus Rapid Transit systems that are opening across the country; the demand is also expected to grow for intercity and school drivers.

How long does it take to become a bus driver?

Most states require bus drivers to be at least 18 years of age and those who travel across state lines must be over 21.

The training period will typically last between 1 and 3 months and consists of classroom training, driving courses and practice runs.

Bus drivers typically must go through a background check before being hired.

Taxi drivers pick up passengers and charge a fee to take them to their destination by the quickest route.

RaceCar Drivers drive vehicles at high speed in front of an audience.

Train Engineers are responsible for checking the mechanics of a train while stationary and moving.