How to Become a Train Engineer 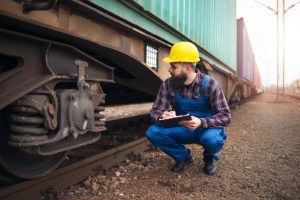 If you’re interested in working in the transport industry, have good technical ability, like to travel and see the country, and are strong in the area of mathematics, then you might like to become a train engineer.

They monitor the train to make sure it is running well, and may make minor repairs if there is a problem.

A train engineer is sometimes known as a locomotive engineer.

There are many different pathways to becoming a train engineer.

Some people study at college, while others complete apprenticeships.

In most instances learning and training occurs on the job.

There is good job opportunity and security in this field, however some entry level jobs are competitive.

If you would like to become a train engineer, you must first meet the basic educational requirements.

You must be at least 21 years old in most places to be a train engineer, but if you are younger than this, there is still plenty you can do to work on your career in the meantime.

The first step is to complete conductor training at a community college or vocational school.

These programs operate across the country in different locations.

Once you have completed this course you should look for an entry level job on the railways, such as a signal operator or conductor.

Most train engineers get their start in these types of positions.

Once you have some experience, you should start applying for positions as a train engineer.

Once hired, you will receive on the job training in this area.

Train engineers need to meet federal licensing requirements which call for a certain amount of classroom learning along with practical experience.

There is also a federal licensing examination which you must pass.

This includes a written exam, a simulator, and sight and hearing tests.

Color blind applicant are unfortunately disqualified, and you must also have a clean criminal record.

A thorough background check is completed for all applicants.

When you become a train engineer, you are responsible for driving a diesel, electric, or even a historical steam engine train.

You could be transporting freight or passengers on short or long distances.

A train engineer starts their shift by inspecting their train, making sure it meets all safety regulations and is in good repair.

They then review their route for the day.

Throughout their trip they keep in close contact with other train engineers and signal operators via radio.

A train engineer must have fast reflexes since they often need to navigate fast turns or last minute signal changes.

They must be able to think on their feet in the situation of an emergency.

Here are some of the tasks of a train engineer:

Like truck drivers, train engineers are expected to often work long shifts and spend extended amount of time away from home.

When you become a train engineer, you’ll start out with some training.

You’ll complete some trips under supervision, once your federal licensing is complete you’ll be able to work on your own.

Many train engineers are passionate about their job and stay in it their whole career.

Some go on to senior positions within transport or logistics, while others may become trainers, educating the next generation of train engineers.

Some become schedulers for the railroad, or other transport industries.

While it is difficult to get a start in this field, job security is excellent once you have attained that initial position.

Many are expected to leave this industry due to retirement in the coming years, which means job prospects are set to improve.

You can find out more about a career as a train engineer from the Brotherhood of Locomotive Engineers.

It’s an excellent field to be employed in, job prospects are good now, and set to improve further in the coming years.

Many who are employed in this area make it their career for life, and report a high level of job satisfaction.

The top earning state in the field is Nevada, where the average salary is $99,520.

The top earning state in the field is Nevada, where the average salary is $8,250.

The top earning state in the field is Nevada, where the average salary is $47.85.

What is a train engineer?

They may drive long-distance or commuter trains that usually have diesel-fueled engines but some also drive electric trains.

A train engineer’s job responsibilities include monitoring and adjusting the train’s speed, observing the track to see if there are any obstructions and communicating with dispatchers over radios.

Locomotive engineers who operate freight trains that travel long routes may have irregular schedules and they can be away from home for many days in a row while those who drive passenger trains work according to more predictable schedules.

How much does a train engineer make?

According to the Bureau of Labor Statistics, locomotive engineers earned a median annual wage of $63,820 as of May 2018.

Salaries vary depending on the worker’s expertise and level of experience.

How much does it cost to become a train engineer?

Train engineers typically receive between 2-3 months of on-the-job training before being ready to operate a train independently.

Locomotive engineers must be certified by the Federal Railroad Administration, a credential that can be obtained after passing a written test and a skills test.

Engineers must be certified each time the route is changed.

What is the demand for train engineers?

According to the Bureau of Labor Statistics, employment for locomotive engineers is expected to decrease by 2 percent from 2018 to 2028.

This is caused in part by the fact that the demand for transportation of bulk commodities, such as coal, is expected to decrease as more power plants are increasingly using natural gas instead of coal to produce energy.

Most job openings will stem from the need to replace workers who retire.

How long does it take to become a train engineer?

Train engineers need a high school diploma or equivalent and they receive about 2-3 months of on-the-job training.

Large rail companies usually offer their own training programs while smaller companies send their workers to a community college or training facility.

As a locomotive engineer, you will also need certification from the Federal Railroad Administration(FRA) for each route you operate on.

This certification can be obtained after passing a written and skills test.

Most locomotive engineers begin by working as conductors for a few years.

Conductors also need certification that can be earned after passing a written test administered by a railroad that is FRA-approved.

In conclusion, you will need a few years of work experience before being ready to drive trains independently.

Audio Engineer is involved with the recording, mixing, manipulation and reproduction of sound.