How to Become an Astronaut 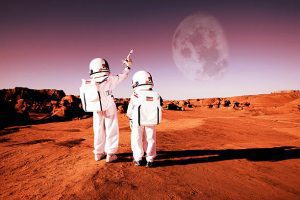 Astronauts are professionals who specialize in the human exploration of space.

Although the most well-known and visible job duty is that of traveling to space, there are many behind the scenes activities that prepare Astronauts for space travel.

Individuals who want to become an Astronaut can assure themselves that the intense training and preparation held ahead of space travelling will fully prepare them to handle the high demands of being one of the few individuals to reside and work in outer space.

Education Requirements to Become and Astronaut

Astronauts are some of the most heavily trained and educated professionals any industry has to offer.

Because flying into outer space involves a lot of risk and a tremendous amount of planning, individuals who want to become an Astronaut must undergo several years of education and pass a series of physical tests to enter this field.

In addition, candidates who want to become an Astronaut must also possess some innate characteristics in order to succeed in this profession.

Some sought after traits include being detail oriented.

This is extremely important because of the high risk involved in this field in which any small error or mistake can jeopardize an assignment and sometimes even lives.

Individuals must also be trustworthy team players in order to be a good Astronaut.

Being a good team player involves good listening skills and are extremely important when on assignment on earth or outer space.

Individuals who want to become an Astronaut must first complete their undergraduate studies to attain a Bachelor’s degree in Engineering, Biological science, Physical science or mathematics.

High marks and grades are of utmost importance.

During their undergraduate degree, individuals must focus heavily on science and math courses to gain valuable knowledge that can be used for flying into outer space.

Although not required, a Master’s degree in Engineering, Biological Science, Physical Science or Mathematics is highly desirable.

Some physical requirements Astronauts have to pass include having 20/20 eyesight, blood pressure at 140/90 when in the sitting position and a height of 62 to 75 inches.

Visit the NASA, website for detailed information regarding this profession and specific requirements to become an Astronaut.

When an individual first gets hired on as an Astronaut, they will spend the first two years of their new job doing specialized training.

Interestingly enough, the majority of Astronauts spend more time preparing for space travel on earth than on actual missions.

This is to assure that a mission can be completed as safely as possible.

In addition, they are tested mentally and are required to complete tasks under extreme environments to assure that they can remain calm under pressure.

Because they work on a team, Astronauts apply for and are assigned specific titles and tasks.

An Astronaut can be specialized as a Commander, Pilot, Mission Specialist or a Payload Specialist.

Before flying into outer space, an individual must undergo trainings and a plethora of physical and mental exams to determine whether they are mentally and physically fit to undergo a drastic trip to outside earth.

Specific assignment details will depend on the role an astronaut has.

During an assignment, an individual may be responsible for a variety of tasks including, observations and research, perform basic maintenance on the aircraft, completing activities in a safe manner and possible general aircraft up keeping.

Astronaut salaries will heavily depend on the level of experience, the number of job duties assigned and the type of agency an individual works for.

Astronauts first entering the field are titled GS-11 candidates and their wages begin at approximately $64,724 per year while more advanced Astronauts, labeled GS-14 can potentially earn approximately $141,715 per year.

Because there are very few openings for Astronauts, it is a very competitive field.

However, once in this line of work, the opportunities for advancement increase and can become a very stable career.

Individuals interested in being an Astronaut will need a combination of higher education as well as tenacity to get into the industry.

However, once employed as an Astronaut, individuals can experience a plethora of opportunities and advancement in this field.

What does an astronaut do?

Astronauts are highly trained individuals who can pilot and/or travel in a spacecraft and do activities that are related to human space exploration.

The latter are responsible for conducting experiments, maintaining spacecraft and equipment, and launching satellites.

Pilot astronauts are international space station and space shuttle pilots that are responsible for the mission, its success, the crew, and the safety of the flight.

Bear in mind that most of the astronaut’s career is spent undergoing extensive training.

Astronauts are employees of the federal government and are civil servants.

How much do astronauts make?

However, a lot of astronauts come from the military, so their salary would differ a bit.

The salaries will also differ, depending on the rank of the military astronaut.

How much does it cost to become an astronaut?

You would certainly need to obtain at least a bachelor’s degree in physical science, biological science, mathematics, or engineering, in order to become an astrophysicist.

Pilot candidates should ideally have at least 1.000 hours pilot-in-command time in jet aircraft (a private pilot license costs around $10.000).

What is the demand for astronauts?

The competition to become an astronaut is, possibly, one of the highest in the world.

There are only a few places available in the country and not that many people are able to meet all the requirements and pass the tests.

At the moment, there are 45 active U.S. astronauts and 28 other astronauts that are employed by NASA but are not eligible for flight assignment.

How long does it take to become an astronaut?

It will take you 4 years to obtain a bachelor’s degree, 2-3 years to acquire a master’s degree and anywhere between 4 and 6 years to earn a Ph.D.

You must be a U.S. citizen and be able to pass the NASA long-duration space flight physical (there are minimum requirements for blood pressure, standing height, and visual acuity).

The candidates have to have at least 3 years of professional experience (for non-pilots).

Pilot candidates should have at least 1.000 hours pilot-in-command time in jet aircraft.

The process of interviewing, orientation, and medical screening lasts for a week; astronaut’s training lasts for years and never really terminates.

Airline pilots generally work on a fixed schedule for an airline as they transport people and cargo to their destinations.

Meteorite Hunter is someone who commits to the art of finding space rocks in a focused pursuit.